“Political aims and ideas have never lost their justification because they could not be implemented immediately. Many of those here present know from their own experience how necessary it is in politics to raise the same questions again and again. Some day the time will come when the ideas will be put into effect. That is my hope!“
(Bruno Kreisky :UNIDO III., New Delhi, 31 January 1980) 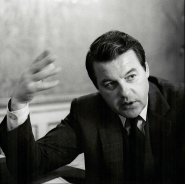 The Bruno Kreisky Forum for International Dialogue is an independent, private institution acting as a  think tank – , which gives open access to the general public and  fosters a collective process of reflection. Over the years, many international guests honoured the Forum with their presence and contributed to its excellent international reputation.  At the same time, the Forum, which previously was the home of the late Chancellor Bruno Kreisky and is located on a splendid site on the outskirts of Vienna, has established itself as a place where lectures, seminars and closed discussions are held about crucial issues of our time. It also offers a location for confidential exchanges of thoughts behind closed doors.

We are proud to say that we were able to achieve the purpose of its founders. It emerged as a widely known centre for international dialogue and is considered as one of the most respected institutions in its field.

The reputation of the BKF is built on such elements as thorough preparation of issues, a vast network of relationships and connections, high calibre participants, non-partisan moderation, discreet discussions, objective reports and methodical follow-up.

During these years, the BKF has emerged as an unparalleled meeting place for groups where the most diverse topics are discussed. The main characteristic of the Forum´s activities is its ability to address sensitive human and political issues, to offer a process of communication between rival partners within Europe, between Europe and its neighbours and across the Middle East.

Because of its vital functions, BKF has become an important European turntable of international dimension bringing together participants from all over the world. The more intensive and extensive its operations here in Vienna, the more demands and requests it receives to apply this model to other countries as well by entering into a dialogue and using its communication skills in order to help parties in conflict, resolve contradictory narratives and overcome the divisions of political adversaries. The aim is to reach a deep understanding of conflicts in order to be able to overcome antagonism and divisiveness.