Africa. Dimensions of a Continent 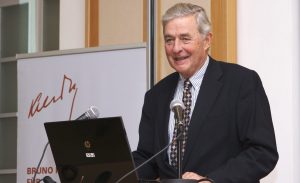 Board Member of the Bruno Kreisky Forum

The lens through which Europe, and indeed the international community as a whole, used to look at Africa was for a long time that of development policy. It was only with the presentation of a common European strategy for Africa that political aspects and the new African institutions shifted into focus.

The founding of the African Union (AU) in 2002, based on an African Union Commission (AUC) modelled on the European Commission. The establishment of an African security architecture and the associated claim to be able to counter conflicts in Africa using African means were to follow.

The general perception Europe has of Africa is, however, still largely dominated by clichés and generalisations. The series „Africa. Dimensions of a Continent“, launched in 2009, has thus focused on the diversity and vitality of African politics from a scientific perspective, considering it from various angles and addressing the different dimensions of the continent as well as the Austrian development policy strategies and the EU-Africa Strategy.